Deaf sports men and women and their public supporters have been contacting Two Big Ears to demonstrate their anger and concern at the news that International Committee of Sport for the Deaf (ICSD) employs staff who have been found guilty of falsifying audiograms. They have responded to the declaration from Deaflympic cyclist Tom Smith who has led the call for the Executive Board of ICSD to investigate and make changes to the ICSD leadership otherwise he will be boycotting the 2017 Summer Deaflympics.

Thousands of people around the globe have been following the story since it broke on the 23rd December here on Two Big Ears. Amongst these readers is Deaflympic swimmer Emily Noden who believes that the situation is “a disgrace because it strips deaf athletes of their reputations as honest sportsmen and women.” She has come out in support of the need for Deaf sport to come under the control of the International Paralympic Committee (IPC) in order that doping and audiogram regulations can be controlled at events like the European Deaf Swimming Championships where she competed recently “ the fact that there was no doping control meant I was at an unfair advantage knowing anyone there could have taken performance enhancing drugs and got away with it, making the sport potentially dishonest.”

A former Deaflympic swimmer, who remains anonymous suggests that it would be difficult to integrate deaf events into the Paralympics but does agree that the ICSD should be working closer in parallel with the IPC “to get back to better managed again.” With doping and audiogram control under independent bodies to oversee this work. The swimmer went on to say “It’s unfortunate that the ICSD Delegate voters went for Russian to be president of ICSD in 2013 who has now caused controversies to date. We in deaf sport will need to learn from mistakes and choose a proper and right people to sit on ICSD and a new president to manage, led and change where Craig Crowley have left off as he had done so much of the rebuilding work…” and that the ‘ill-advised’ delegates who voted not to re-elect Crowley in 2013 are “banging their head on the wall with their mistake.”

Verity Joyce who competed in the Deaf World Games (Deaflympics) in 1993 aged 12 can “certainly see advantages for being part of the para movement – funding being a big one, along with status and integrity.” Able to speak from previous experience of being part of a former Paralympic swimming set up “communication is key and no other athlete was isolated to the same level as I was in terms of information and inclusion. If we are to become a part of the para movement, it will be a huge culture shock to them, the media and so on. Also we need to fight for communication inclusion on a whole new level, which in some ways will be a shame as it will detract from the sport.”

In reply to Joyce, Emily Nolan said “The IPC, with their millions of pounds of funding they have received in recent years would certainly not have any problems in funding interpreters”.

Members of the Deaf community, like David Jackson (married to the Deaf Culture and Sign Language advocate Eva Feilding-Jackson) who supports and enjoys watching Deaf sport are coming round to the idea of deaf people competing in the Paralympics and argues that Deaf sport should accept the fact that logistics and IOC regulations will mean that deaf athletes will be subject to the limitation of athlete numbers as it is for all disability classifications because “It is the Deaf Awareness aspect that will definitely arise from seeing Deaf athletes on TV and in newspapers. That can certainly be a good thing for us. We need to force the ICSD do accede to this- it seems to me that some of the ICSD members are from countries where there is a clout to stop us being part of the Para’s movement. If that is the case, it is a very negative attitude that we will suffer for years to come.”

The ICSD (International Committee of Sport for the Deaf) have not commented publicly on the issue of audiogram cheating but reliable sources have informed us at Two Big Ears that the Executive has “taken notice” of the story being released.

3,000 viewers in 59 countries are paying attention to this story and expect to hear some answers from ICSD.

The Russian-led ICSD who control regulations for the Summer and Winter Deaflympics and oversee regional federations around the globe will be holding their next (45th) Congress at the end of March during the 15th Winter Deaflympics taking place in the winter sports city of Khanty-Mansiysk – in one of the most isolated and little known regions of Russia. Congress information packages have ben sent out to national delegates and ICSD president Rukhledev said ‘The more of you are able to come, then the more we are able to discuss the many pending items on the agenda that requires approval.”

Guy Finney of the UK deaf athletics team wants the 45th Congress delegates to challenge ICSD on taking remedial action over false audiograms – Two Big Ears wants to know who will be brave enough to make the long trek to Khanty-Mansiysk to stand up and challenge the Russian Bear? 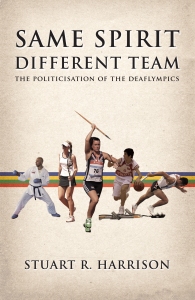