With just 71 days to go to the Opening Ceremony, President of the ICSD Dr Rukhledev has praised the Organising Committee of this year’s Summer Deaflympics in Samsun, Turkey.

This is very good news indeed, it is important that standards are continually met in order to meet the high demands and expectations of each generation that comes into sport.

I share Rukhledev’s sentiments and praise for the high quality of the 2005 Deaflympics as I was with the GB team in Melbourne when the organisers teamed up with the Commonwealth Games committee and worked together to use the Deaflympics as a testing event for many of the venues. Taipei were up next in 2009 as they wanted to show the world and the IOC that they too are capable of hosting World Class events and should be considered as a contender to host the Olympics. Again, I can also vouch from personal experience from being there with my family that the organisers did not disappoint us; up until now athletes, officials and administrators in the Deaflympic movement have often wondered if it was possible to improve on the spectacle delivered by the City of Taipei.

By all accounts, it would appear that athletes, officials and supporters heading for Samsun this summer are going to rewarded with the best ever Deaflympics to date. To back up ICSD’s claims, the Chef de Mission of the DeaflympicsGB was very impressed with how things were progressing when he went out for an early inspection visit in February, so things have clearly moved up a notch in the three months since then.

Athletes and coaches preparing for this year’s event should be highly motivated by this good news as things have been very difficult economically, especially when many governments still refuse to treat Deaflympians with the same accord as they do for Paralympians. Whilst DeaflympicsGB have maximised the use of social media, personal contacts and sacrificed training time for fund-raising activities to reach their funding targets recently, other Commonwealth nations like Australia are still looking for funds. The President of the IAAF, Sebastian Coe once said that if you put the athletes at the centre of all your planning and preparations, then they will be able to perform at their lifetime best.

With favourable inspection reports coming in, it would appear that the hosts are going to deliver as Lord Coe suggests. For example, this will be the very first time that there will be an Athletes Village for the Deaflympics where everyone will experience the ‘melting pot’ of cultures and nationalities all sharing the same accommodation to be hosted by the University of Samsun. But this will also bring a new set challenges for the 80 or so, national Chef de Missions and their backroom staff who, up until now have been used to managing the daily logistics of preparation and recovery of their athletes from the sanctuary and isolation of privately booked hotels and other forms of accommodation, with minimal interaction and interference from other teams.

This year I will be joining DeaflympicsGB  as Manager for the golfers where our sport will be medalling for the first time since the games began in 1924. Our hosts will be Samsun Golf Club whose brochure and promotional materials backed up by our CdM’s inspection report reassure us that only the very best will be good enough for our competitors. 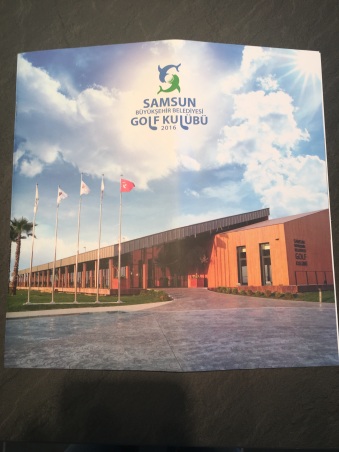 For more information about the Deaflympics 2017