Professional cyclist and Deaflympic silver and bronze medal winner, Tom Smith from Wales has responded to the latest news on the falsification of audiograms. 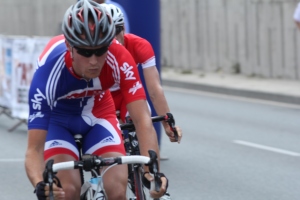 “Your recent article on the falsification of audiograms by the Russian leadership of Deaf sport has touched me in a negative way. I am really disappointed about what I have read.

I have never been comfortable about the outcome of the election at the ICSD Congress in Sofia 2013, where America and Great Britain promoted clear mandates and manifestos in their election campaigns. The Russians provided neither a manifesto nor even a general plan on what they were going to achieve.

Since then, the ICSD President; without reason, has sacked its entire staff, the majority of whom was British and brought in an abundance of Russian personnel.

After this I learned that at the European Swimming Championships (held in Russia), all doping controls were held on the final day after a week’s worth of competition, and not all events were tested. This alone makes a mockery of sporting values, and towards WADA.

And then we learn about a senior member of staff, put there by the ICSD President himself; submitting a false Audiogram under an athletes name, putting them in danger of disqualification. Fortunately for that athlete the situation was rectified but let me ask you this- what right do Russia have to the in charge of the ICSD?

I want to say to my fellow Deaflympians; do you honestly believe that the ICSD leadership has your best interest at heart? They have so far ignored the Athletes Commission chaired by Dean Barton-Smith and Terence Parkin. They have already been found guilty of manipulating audiograms. They have lied, they have cheated, and they have alienated the IOC and IPC along the way. Deaf Sport currently has no future.

Are you really going to sit back and allow this to carry on? We should be in the Paralympics where our best interests will be safeguarded, and also to enhance deaf awareness. There have been talks of a petition for the Deaflympic athletes who really want this change. If you want this change, email Two Big Ears and let them know.
As an athlete who has morals and ethics, I can say that I will 100% not be going any further Deaflympics with these criminals in charge.”